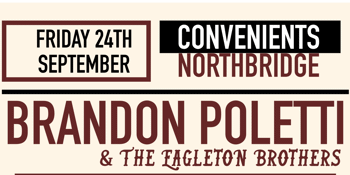 Angie Colman, Whiskey Jack and Wallace and the Two
Convenients - Northbridge (Northbridge , WA)
Friday, 24 September 2021 8:00 pm
1 day away
18 Plus
Music
Country
Folk
Send this event to
For the past 5 years Brandon Poletti has been captivating audiences with his eclectic story telling and upbeat country tunes. Alongside his band, The Eagleton Brothers, the collective have quickly become known around West Australia as one of the best upcoming Alt-country acts with their high energy stage performance.

Join Brandon for the release of his new song, 'Those Stories.' Produced by Josh Dyson at Villa studios this song hosts massive harmonies, layers of guitars and one of the catchiest chorus' you'll hear this century. This is the first single released from Brandon's upcoming album, which has already earned a WAM song of the year nomination prior to being released. Brandon will be supported by local legends Whiskey Jack, Angie Colman and Wallace and the Two.

Wallace and the Two will also be launching their highly anticipated single 'Old Joy.'