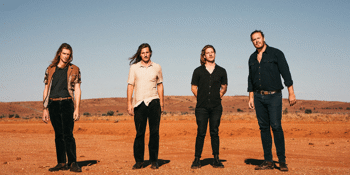 + Special Guests
Altar (Hobart, TAS)
Saturday, 3 July 2021 8:30 PM
48 days away
18 Plus
Rock
Alternative
Music
Arts
Australian Artists
Send this event to
The Vanns, the South Coast favourites make their return with the charged up new single ‘Red Light’. The single, the band’s first new music since the release of their acclaimed debut album Through The Walls in 2019, is The Vanns at their strongest. They’ve re-emerged from the shadows of 2020 ready and raring to go; ‘Red Light’ is the perfect green light moment for the four piece’s new chapter. Released ahead of their first Australian tour in twelve months, the single is drenched in catchy melodies, vocals and rhythms. In short, ‘Red Light’ is tailor made for The Vanns’ live experience.

Recorded in Byron Bay, with Chris Collins (Gang of Youths, Skeggs, Tyne James Organ, Ruby Fields), The Vanns got the song in the bag after a few days spent out with Collins across multiple sessions. The band’s dynamic has only become stronger as they’ve managed to navigate 2020 together as creatives. ‘Red Light’ is the type of song that can act as a gateway for new fans of The Vanns, while serving as a tight reminder for those who have been there from the beginning: The Vanns are building a legacy to be proud of. 2019 was a huge year for The Vanns. The release of Through The Walls saw the group graduate from fresh faced live favourites, to a formidable force on the Australian tour circuit. Earning acclaim from across the industry, including a spot as the triple j Feature Album artist, The Vanns converted this praise into the live front, selling out venues across the country. And now that live music has properly restarted around the country, The Vanns are hitting the road through into July, taking in shows nationwide.