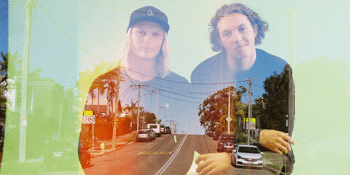 Across five years, two studio albums and an EP, Windang's Hockey Dad achieved more than two coastal kids could ever collectively dream of. Their last effort, 2018's Blend Inn, ended up being one of the year's biggest successes for independent Australian music. Not only did it crack the top 10 of the ARIA album charts, but it also notched up four spots in triple j's Hottest 100, two sold-out national tours and accrued nearly 24 million streams on Spotify alone. Not bad for a pair of kids from a town where its previous biggest musical export was a jingle for a computer store.

Needless to say, when it came to writing Blend Inn's follow-up, Zach Stephenson (vocals, guitar) and Billy Fleming (drums) could have easily switched to autopilot and followed the blueprint that had lead them to prosperity in the past. However, that's not the path they chose to take.

Despite the fact the band returned to the exact same studio and used the same producer as Blend Inn – that being Robert Lang Studios and the veteran John Goodmanson, respectively – their third studio album Brain Candy is far from any sort of retread. It's a textured, contemplative and thoughtful record – a reflection on life written by a band that has ostensibly grown up in public.

“When we were making the demos, it was kind of exciting,” says Fleming. “I feel like there will definitely be an element of surprise when people hear it.”

Stephenson, Fleming's friend of over 20 years and bandmate of nearly 10, agrees. “It's important to keep the fear instilled in you as an artist,” he says. “That sheer terror the night before something comes out is something you can't replicate – and when people like it, it makes you even prouder of it.”

Listeners were first alerted to the existence of Brain Candy with the release of “I Missed Out” in November 2019. Premiered on triple j and landing at #60 in the Hottest 100 of 2019, the song hones in on cooing lead guitar and steely bass rather than the band's go-to phaser-laden chords and boom-thwack drums. The song's confessional, vulnerable lyrics also hone in further on the rawer honesty of previous singles like “I Wanna Be Everybody.”

Put it this way: It's Hockey Dad, but not as we know them.

In many ways, that MO is reflective of how Brain Candy comes across as a whole. While they've created something that is still identifiably theirs, the route that they've taken to get there subverts what has come to be expected. Whether it's the tense, volatile “Germaphobe” and “Heavy Assault,” the unexpected tropical detour of “Keg” or the morose, slow-mo balladry of “Itch,” Brain Candy makes bold ventures outside of Hockey Dad's immediate sonic spectrum. It's high risk, absolutely – but, as the album plays out, it reveals itself to be high reward as well.

The album's title is a none-too-explicit reference to chemical intake to sooth one's mind. Be it serotonin, antidepressants or something a little more back-alley, there's a lot of provocative imagery when it comes to such a title – something that certainly isn't lost on the band. To them, their ultimate brain candy is the music itself.

“It helps, putting pen to paper,” says Fleming. “If you're feeling wiggy about it, just write about it. When we're on tour, just sending it... at the end of the trip, you have these albums, and you have these songs that capture those moments.”

Whether you've followed their trajectory from grommets to garage-rock royalty, or you're making your Hockey Dad debut out of pure curiousity, Brain Candy will prove to be one of 2020's must-hear albums.

FAQ
- Your ticket includes access to the entire NightQuarter venue (4pm-10pm) with food stallholders, amusement rides, more entertainment, themed bars and more.
- We accept companion cards
- This event is licensed all ages. A minor is classified as under 18 years of age. Minors must be accompanied by a guardian over the age of 25.
- This event is in a seated format under the directive of Queensland Health. You can stand and dance in front of your chair. Seating will be allocated on arrival, please arrive with your group. Format is subject to change in line with changing QLD Health directives.