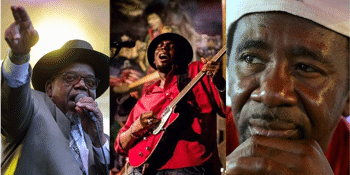 Oscar Wilson's (Chicago IL) resume checks off a lot of boxes.
First-and-foremost, he’s a charismatic frontman. Most would agree that at 6-3, 300- pounds, he looks larger than life stationed up on the world’s blues stages.
He’s also a talented songwriter, a well-respected harp blower and just an all-around hard-working and extremely nice guy.

Chris Pitts (Memphis TN), has a huge presence on stage, and is the undisputed Memphis blues music giant, leading you on a lion-hearted experience of searing soul ballads to parching guitar riots.

Immerse yourself in an authentic and interactive journey through the blues, following the very same blues highway from Mississippi to Chicago, once travelled by the genre’s legendary predecessors.

Never to be repeated – this musical experience will be steeped in history whilst being as raucously entertaining as a late night “juke joint”.

Also appearing on the program, as the show band, will be Jules Boult & The Redeemers.