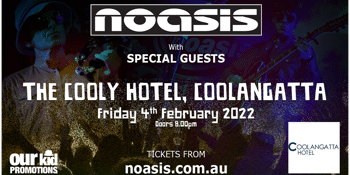 Coolangatta Hotel (Coolangatta, Gold Coast, QLD)
Friday, 4 February 2022 8:00 pm
134 days away
18 Plus
Rock
Send this event to
NOASIS hit the Gold Coast again following a massive sell out show in early 2021 at the Cooly! This time as part of their Supersonic Summer Tour.

Originally formed in England, NOASIS were born during the 90’s in the midst and mayhem of Brit Pop performing shows across the UK in clubs, pubs and festivals building their reputation as one of England’s most authentic Oasis tribute acts.

Now permanently based in South Australia, Noasis have fast cemented themselves as Australia’s #1 Oasis Tribute Show as they continue playing sold out shows across the continent since early 2020. Their tour has seen them performing to thousands in some of the country’s most iconic music venues, and continues to grow on both the Australian and International stage.