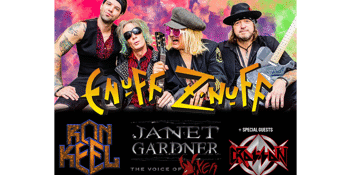 with Ron Keel from Keel ( USA) , Janet Gardner ( the voice of Vixen) ( USA) , CROSSON (AUS)
Crowbar Sydney (Leichhardt, NSW)
Saturday, 29 February 2020 7:00 pm
7 days away
18 Plus
Rock
Send this event to
ENUFF 'Z NUFF
In a career spanning over 30 years and 22 releases, Enuff 'Z Nuff were once considered rocks Next Big Thing. Infusing Power Pop with Glam Metal before genre-bending was popular, Enuff 'Z Nuff are best known for hit singles 'Fly High Michelle' and 'New Thing'. After releasing Diamond Boy in 2018, Enuff 'Z Nuff are experiencing a resurgence in popularity as the wheel of music spins back around to power metal.
RON KEEL
Ron Keel has enjoyed a distinguished career as a vocalist and guitarist, lending his talents to Keel, Steeler, Fair Game, Iron Horse and a host of solo projects since starting his career in the early 1980s. His latest project Ron Keel Band (RKB) signed to Dave Effelson's (Megadeth) EMP Record Label Group in 2017 before releasing debut album Fight Like a Band in early 2019.
JANET GARDNER
After establishing herself as vocalist and rhythm guitarist for all female Glam Metal band Vixen, Janet Gardner has recently left that band to concentrate on her rapidly building solo career. Vixen are best known for the single 'Edge of a Broken Heart', with their early success seeing them support Ozzy Osbourne, Scorpions, Bon Jovi, Kiss and Deep Purple. After releasing her debut self titled album in 2017, Janet confirmed her resignation from Vixen in a facebook post published early in January 2019, citing a wish to devote more time to family and prioritize her solo career as the main reasons. She has since released her follow up album 'Your Place In The Sun' to glowing reviews.
CROSSON
Sydney outfit Crosson have been described in Classic Rock Magazine as a combination of Kiss, Motley Crue, The Darkness and Steel Panther, high praise indeed for a band with only two albums releases to their credit. Self-diagnosed as Theatrical Glam Melodic Rock, Crosson pride themselves on their live performances that feature high energy choreography, costume changes, smoke, sirens and catchy rock anthems. With a new album scheduled for release in early 2020 Crosson head into the Melodic Rock Fest sideshows with a firm desire to launch their music into the next decade and beyond.