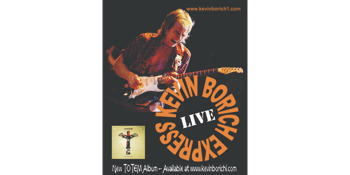 With a professional career spanning 47 years, Kevin Borich has done it all. Beginning with the LA- DE- DA’S in New Zealand, writing the classic hit ‘Gonna See My Baby Tonight’, to his KEVIN BORICH EXPRESS and The PARTY BOYS, Kevin has performed at some of the biggest Rock events Australia has seen.

From your local to the big events, he has carved out a revered reputation in the Australian Music Industry, performing his music with a youthful exuberance, - giving extra meaning to the word LONGEVITY.  Kevin has played and recorded with artists such as Renee’ Geyer `Blues License’ - Dutch Tilders `The Blues Had a Baby ‘- Richard Clapton `Prussian Blue’, Jamming with Carlos twice, also with Bo Diddley, Richie Blackmore (Deep Purple), Ron Wood (Rolling Stones), John Mayall, Taj Mahal & members of Living Colour. Overseas tours and tours with Jimmy Barnes, Renee’ Geyer, Mark Hunter, and being Co Founder member, and author of the Party Boys name have added spice to his career.

Well known for his high-energy electric guitar style, his performance is hailed throughout the music industry as world class.  He also starred in the hugely successful 18 ‘Sold Out’ Australia wide ‘Long Way To The Top’ 2002 arena concerts.
Kevin has added a 1930’s National Steel acoustic guitar in his show.  This “laid-back” acoustic style is a very well received addition to his Shows providing a mellower base from which to launch later into electric Land, with Fender Strat and Gibson Firebird slide guitar.