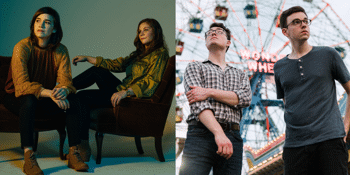 CANCELLED - 7PM - The Other Favorites and Reina del Cid

With the effects of COVID-19 growing at such a rapid pace, and with many venues temporarily closing their doors, we have been forced to take a hard look at our upcoming U.S. tour. The last thing we would ever want to do is jeopardize the safety of others, particularly our fans, who are the reason we do this in the first place. As a result, after much deliberation and with deep regrets, we have decided to postpone our U.S. performances from March 24th to April 5th, as well as our Australian performances from April 21st to 26th. The new dates for the U.S. tour will be July 14th through 26th, and the Australia tour will now be October 27th through November 1st. Exact dates and times will be announced shortly - thank you for your patience! Your ticket will automatically roll over to the new date, or, if you wish, you can receive a refund through the ticketing provider, Oztix, who can be contacted here.

While we won’t be able to see you in person as soon as we would have liked, we’ve decided to use the downtime as an opportunity to host our first ever live-streamed concerts on March 26th and April 25th. We hope that this can be a way to share live music under unusual circumstances - from our living room to yours. There will be a Q&A session immediately following both performances. Digital tickets for the live stream, which help support us under such unusual circumstances, can be purchased here  (March 26th) and here  (April 25th).

As always, thank you so much for your support, and we truly can't wait to see you later this year. In the meantime, stay safe and keep an eye out - given the circumstances, we sure will have time to create new music!

Carson & Josh
The Other Favorites is the long time duo project of Carson McKee and Josh Turner. Perhaps best known for their performances on YouTube, which have garnered millions of views. The Other Favorites are now based out of Brooklyn, NY. Together, Turner and McKee bring their shared influences of folk, bluegrass and classic rock into a modern framework; one distinguished by incisive songwriting, virtuosic guitar work and tight two-part harmony.