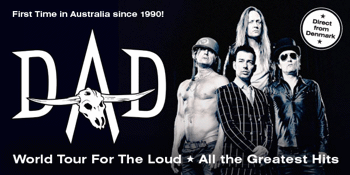 Danish rockers, D-A-D 35th Anniversary World Tour October 2021!
For this special occasion and D-A-D’s first Australian Tour since 1990 they will perform all their Greatest Hits - Sleeping My Day Away, Girl Nation, Jihad, Laugh And 1/2, Bad Craziness, It’s After Dark, I Want What She’s Got and heaps more!

D-A-D have continued a schedule of consistent touring performing to thousands of fans. With only a single line up change over 20 years ago, in a career spanning almost 40 years, the live chemistry of the band is unparalleled!

After a 30-year wait Australia will finally get to witness what European audiences have indulged in for the last three decades! Don’t miss this is a once in a generation tour for Australian fans with a career encompassing 35th Anniversary setlist!