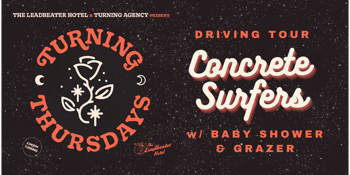 With Baby Shower
The Leadbeater Hotel (Richmond, VIC)
Thursday, 20 May 2021 7:00 PM
10 days away
18 Plus
Rock
Alternative
Indie
Send this event to
Concrete Surfers are heading out on the road to celebrate the release of their new single 'Driving', which is an introspective exploration into the way we cope with daily struggles. Find tour dates and a link for purchasing tickets below!

Driving will be the first taste of new music since their last single Never Understood which was released in February 2021. The band went on a headline tour fresh off of playing Falls Festival in 2019/20 featuring dates with US heavy hitters Wavves, but was unfortunately disrupted after the first show by Covid-19 and had to cancel the remaining dates.

Concrete Surfers have supported the likes of Royal Blood (only support on their Splendour Sideshow in 2017), The Jungle Giants, Spacey Jane, Ocean Alley, Skegss, Tired Lion and Ruby Fields.

Concrete Surfers are a Brisbane band to the core, creating a voice to challenge societal norms through forward thinking lyrics combined with hard hitting instrumentation.

Made up of Brothers Jovi & Jamie Brook (vocals, guitar and drums respectively) with mates Sean Foster (lead guitar) and Trent Courtenay (bass) combine their influences together to create a unique blend of garage-rock and pop.

Their distinctive sound and energetic live performance have created a fast-moving trajectory for the group of four.

Driving will be released on the 23rd of April.