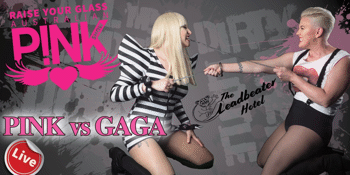 POSTPONED - NEW DATE WILL BE ANNOUNCED BY THE 3RD OF APRIL

The Australian Pink Show is excited to announce the Ultimate “Rock Versus Pop” Show, Pink Versus Gaga! Australia’s best and most spectacular “Ultimate” Tribute Show!

P!nk - With countless top 10 singles, sold out tours and record breaking attendances, without doubt, P!nk is the most popular and dazzling “Rock Goddess” of the international music scene.

Gaga - Having sold 27 million albums and 146 million singles, Gaga is among the best-selling musicians of all time. Known as the “Queen of Pop”, Gaga is sure to amaze!

The Australian Pink Shows Pink Versus Gaga, a spectacular like no other, a 2 . hour feature packed show with Costume Changes and two Stunning performers, “Raise Your Glass” it’s time to “Marry the Night Away!”. Complete with 4 Piece Backing Band featuring superb musicianship, the show is the closest thing to seeing these 2 Artists in Live in Concert.

This is a Tribute to two of the most influential female artists of all time!