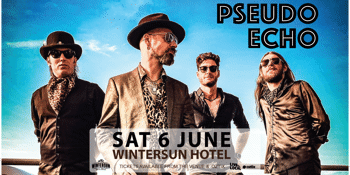 Wintersun Hotel (Bluff Point, WA)
Saturday, 6 June 2020 8:00 PM
68 days away
18 Plus
Music
POP
Rock
Send this event to
Pseudo Echo pioneered the 80s with their stylized electro sound and look establishing themselves as one of the most iconic, multi award-winning and influential bands in the country, producing several Top 10 hits including “ Listening”, “A Beat for You”, “Don’t Go”, “Love An Adventure” and “Living in a Dream”, gold and platinum albums “Autumnal Park”, “Love An Adventure” and “Race”.

Following their worldwide smash-hit “Funky Town”, the band has released several studio albums including “Teleporter”, “Ultraviolet” and more recently “Live at the Viper Room” recorded at the legendary Viper Room in LA.

The band is back bigger than ever to critical acclaim with an edgy look and sound, reflected in the band’s social media, drawing a new generation of fans and touring sellout shows nationally and internationally with the likes of Culture Club, Human League and Belinda Carlisle.

Now catch the energy of Pseudo Echo performing all of their smash hits, as well as a “mega mix” extended version of their international smash hit Funky Town including some real surprises .. back by popular demand for one night only!