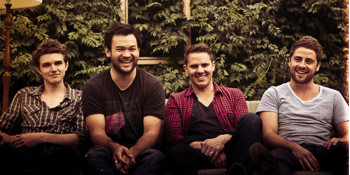 Brass Monkey (Cronulla, NSW)
Friday, 28 February 2020 7:00 PM
10 days away
18 Plus
Adult
Music
Send this event to
In 2009, FisherKing exploded onto the Indie music scene when they released their self-titled EP. Hot on the heels of that success FisherKing won Triple J’s Unearthed imprinting their signature sound on a new generation of fans.

Taking to the road, FisherKing spent the next year touring, writing and recording.  It was over this time that their first album would take form. The following year ‘Circles’ was released.  ‘Circles’ was a diverse showcase of indie rock, heart-breaking ballads and a uniquely coastal sound.

In 2014, as band members started families and lead singer, Sam Stephenson, was moving to Nashville to share his music, FisherKing decided it was time to play one ‘Final Show’ at the Brass Monkey - a venue that they called “home”.  It was a better send off than they could have ever asked for.

Now, six years years after that ‘Final Show’ and ten years since the release of their album ‘Circles’, FisherKing felt it was time for another ‘final show’ - a reunion, if you will.  With all the members rarely landing in the same city for a short amount of time, it felt like it was the right thing to do.

For one special night only at the Brass Monkey, FisherKing will be returning to the same stage to play the songs that mean so much to them - the songs that took them around Australia and allowed them to share their music with so many.

Join FisherKing for the ’10 year anniversary / Reunion / Final Final Show’ for the best night you’ll ever have on a Friday in a leap year.