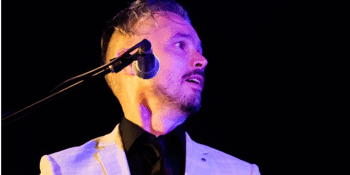 Described as charismatic storytellers and raconteurs - their music remains true to the blues tradition, delivered with effortless demeanour, humour and a style that has been closely linked with that of the genre’s legendary predecessors.

Two award winning musicians come together for one night!
This promises to be an unforgettable performance that all music lovers will enjoy!

Jules Boult is an award-winning blues singer, songwriter, multi-instrumentalist and recording artist. Jules’ musical career has taken him across Australia, the United States and Europe. Since 2011 he has released five albums to critical acclaim and been awarded a coveted Australian Blues Music Award. From 2015 to 2019 Jules toured the US annually, from New Orleans to New York, via the Mississippi delta, performing and recording with various musicians, including Kermit Ruffins, Mississippi John Horton, and The Oak Ridge Boys.

One of South Australia’s gemstones of musicianship. Over four decades travelling as a troubadour journey man has seen Chris Finnen often referred to as the ‘guitarist’s guitarist’. Recognition for Finnen’s work has brought him national and regional guitar awards and 1995 saw him inducted into the SAMIA Hall of Fame.