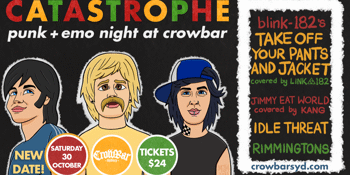 Blink-182's Take Off Your Pants and Jacket, 20th Anniversary Party

Blink-182's Take Off Your Pants and Jacket, 20th Anniversary Tribute

Now that this show is falling on the Halloween weekend, make sure you turn up in costume! Prize for best dressed.

It is hard to believe that it has been 20 years since Blink-182 released their iconic album, Take Off Your Pants and Jacket. To celebrate, the boys in LINK-182 are taking a break from playing Nintendo to cover the classic record from front to back.

KANG will be treating us to a set of Jimmy Eat World songs, with plenty of tracks from Bleed American (which also turns 20 this year).

IDLE THREAT will be bringing us a set of their own riff-filled punk rock tunes, and opening the show are Sydney pop punkers, RIMMINGTONS, with their Teenage Bottlerocket/Ramones-inspired originals.

**This show was originally planned from Friday 2 July, but rescheduled due to lockdown**