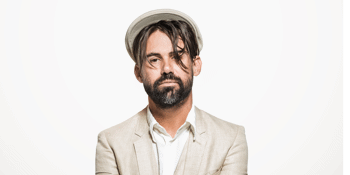 Phil will be performing solo versions of classic Grinners tunes that he penned or co-wrote , his own solo works old and new, plus a few ring- in tunes arranged in true ‘Jamo’ style- just for the fun of it.

Phil Jamieson is best known as the front man of iconic Australian band Grinspoon. The first band ever Unearthed by the ABC Youth Radio Network triple j (1995). Grinspoon have been together for over twenty five years,  yet its phenomenal Chemical Hearts 2019 Concert Tour performed to 24,000 fans in sold out multiple capital city venues. This was a milestone career best for Phil with a next level personal performance.

Grinspoon have been one of the most successful bands in Australia’s music history. They have received 13 ARIA nominations and in 2005 won an ARIA “Best Rock Album” for ‘Thrills Kills + Sunday Pills’. They have been nominated for APRA & ARIA Song of the Year.
Grinspoon’s Albums “Guide to Better Living”, “Easy”, "New Detention, & "Thrills Kills & Sunday Pills" all went platinum in Australia.