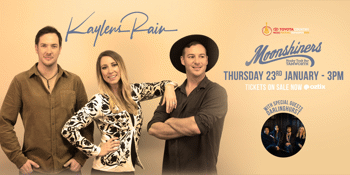 Two time Golden Guitar nominated Kaylens Rain features the magnetic vocals of Kaylee Stewart combined with the stirring guitar of Glen Harrison and driving bass of Joel Stewart. It’s clear that music has always been in their household. Together the trio create a captivating and unique blend of three-part harmonies and soulful guitar tones. Originally a duo, it seemed natural that Joel would step forward as a full time band member in 2018. Kaylens Rain have released two albums, the debut Found and sophomore In Our Blood. Kaylens Rain are playing Moonshiners Honky Tonk Bar Tamworth on Thursday January 23 at 3:00pm. “TCMF is always a highlight for us and one of our favourite shows to play. We can’t wait to bring our show to Moonshiners once again in 2020 and showcase some new songs and all the favourites for the fans said Kaylee Stewart."

Special Guest is Australian country music’s breakout band of 2018 Darlinghurst. Their debut single single “Sorry Won’t Get You Back” is big, soulful and beautiful, and is currently sitting at #1 on the Official Australian Country Music Chart.