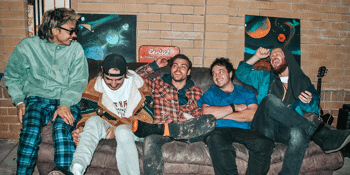 Thirsty Chiefs Brewing Company (North Lakes, QLD)
Friday, 18 February 2022 7:00 pm
154 days away
18 Plus
Indie
Australian Artists
Send this event to
February 2022 will see RANCID EDDIE pulling themselves up from a pile of crushed-up beer
cans and cigarette butts, as they hit the road for the very first time on the OPPOSITE OF WET
tour.

2021 has been a big year for the boys from Mount Waverley with their acoustic version of
“Dry” reaching over 3 million+ combined streams on Youtube and Tik Tok, a huge sold out
Melbourne show, and the release of their latest single Champagne being heard across the
Triple J airwaves.

After many requests, September 28th will see the studio version Dry being released into the
world.

“Dry was written one morning on the back of a two day bender. A couple guitars and 5
blokes kickin’ back around a table of empty stubbies, and the good old no sleep demons. The
song is about realising a relationship is over before it is, and the pains of falling out of love
with someone.
After a trip to the bottle-o and a visit from Satan himself, someone set up an iPhone and we
gave it a crack. After putting this flea bitten back yarda recording on the socials, it’s
absolutely mind blowing and heart warming to think that us blokes can pull a tune out to
resonate with the rest of the world.
We love Dry cause we’ve all been there before, and it feels so good to belt out at the top
your lungs with the thought of you giving your ex the finger.

“The past 6 months for us as Rancid Eddie have been absolutely insane. We've developed a
following we never even thought possible. Fully convinced we were absolute dumb c*nt
wankers as a band for posting on tiktok, it’s been a real magic carpet. We've taken some of
our ‘Rancid Tiktoks greatest hits’ to studio and they're sounding fire as fuck.

“We had an insane first gig back after a year of covid lockdowns - it was sold out, the crowd
was absolutely insane and we were rusty as fuck, which was just a pleasure all round to say
the least.

“We're all keen as tits to hit the road and thank the bloody lot of ya for the support so far.”