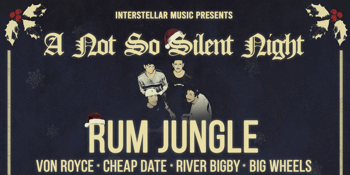 
Newcastle’s Rum Jungle have emerged as a serious player in one of the country’s most lively music scenes with a refreshing mix of reggae and rock. The four-piece group have developed a devoted fanbase off the back of their first two EPs Crazy Days and Sun & Smoke, and have already shared the stage with the likes of Lime Cordiale, Peking Duk, and Hilltop Hoods.
Their most recent single ‘Lately I’ve Been’ saw Rum Jungle take their sound to new heights with laidback vocal melodies and dynamic guitar runs, all while keeping their reggae-fusion sound. The band sold out their last hometown headline show in early 2021 and before the global pandemic, joined the line-up of THIS THAT Festival and Rolling Sets Festival.
-----------
Von Royce’s most potent weapon is their live show. The colossal energy they bring to the stage with steezy grooves and massive breakdowns ensures no one is left untouched by their fiery finesse. The groups’ natural chemistry is reflected in their easy-going, piss-take interactions with each other and the crowd.
Formed in mid-2019, Von Royce's sound has progressed into a scrumptious soup of rock/reggae/rap with hints of soul, funk, and metal. Their charged live shows have quickly earned them a reputation as one of the most exciting acts to emerge from Brisbane's scene.

Tickets go on sale Monday 8th November @ 9am. This is expected to sell out so get in quick!

*Due to government regulations, it's a requirement upon entry to the venue for all patrons to be double vaccinated.