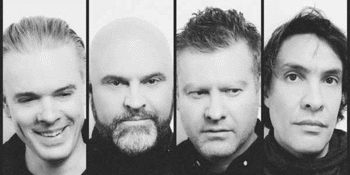 Coopers Alehouse Gepps Cross (Blair Athol, SA)
Friday, 21 February 2020 9:00 pm
34 days away
18 Plus
Alternative
Grunge
Rock
Music
Send this event to
Almost 17 years since it was first released, Motor Ace’s classic 2002 album Shoot This will now be issued on vinyl for the first time. To mark the occasion of its release on June 28, the band has overseen a slight twist on the album’s original cover artwork. The album will be pressed as a limited run of white vinyl.

An ARIA Number One album on release, Shoot This was initially demoed after Motor Ace wrapped up touring their 2001 debut Five Star Laundry. “It was an exciting time for us,” drummer Damo Costin says of the album’s conception. “We demoed the record at Hothouse Studios in Melbourne and recruited Chris Sheldon, who had mixed Foo Fighters’ The Color And The Shape to come out to Australia to record the record. The demos were really good, so there was pressure to come up with something special.”

The first song frontman Patrick ‘Patch’ Robertson presented to the band was Carry On, which would later reach 13 on the ARIA Singles Chart and figure in the Triple J’s 2002 Hottest 100 countdown.

“Patch had come in with Carry On as a demo and we were blown away,” Damo says. “It was a sign of a twist in a new direction and wider in scope.”

Bassist Matt Balfe suggests Carry On set a new tone for the band. “Carry On was a big leap in a different direction from the guitar angst of Five Star Laundry,” Balfe says.

Shoot This debuted at number one in the ARIA Albums Chart, besting the #4 peak of the previous year’s Five Star Laundry. “We had worked hard to promote Shoot This, so when the record went Gold and landed at number one we were on stage in Adelaide and we were pretty blown away,” Damo says. “I remember seeing a bottle of champagne backstage after the show that was gifted by our team and it didn’t take long for us to celebrate. We were The Beatles for a week and we certainly enjoyed it, I can assure you!”

From there, Shoot This took Motor Ace across the globe. “We toured relentlessly in Australia, Japan, UK and the US for the best part of two years,” Matt says. “It was an amazing experience that opened doors to new audiences around the world and simultaneously tested us as a group and as friends. Shoot This was our bittersweet record.”

While the band released just one more album, 2005’s Animal, before calling it a day, last month saw Motor Ace return to the live stage for their first Australian tour in 13 years. The gigs were acclaimed by fans and critics alike, with reviews with The Music concluding Motor Ace “had lost none of their spark”, The Rockpit said they “sounded as tight and as clean as one of their well-produced albums” and X-Press commented Motor Ace were “still incredibly tight, they are absolute pros”.