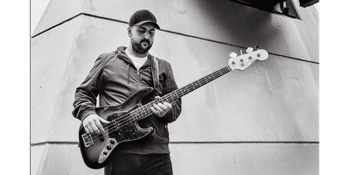 Matinee: Jake George and the Investigators

The band will be performing tracks from the Heart EP, released on Spotify in July 2019, as well as tracks released individually and new material. Written by Jake in the early months of the same year, ‘Heart’ features 6 tracks of hard funk and elements of soft rock and pop, with sounds similar to the Stone Roses and the Red Hot Chili Peppers. A few other individual releases were brought out in the later months, then came the idea of playing the songs live, the first step being to form a band. After meeting Russell through an online advertisement, then came a few jam sessions and the two instantly clicked. The struggle to find a drummer took its toll in the following months, however by the end of the year Alvin Garin had made contact, and after a few rehearsals the three piece was ready to go. The first show being a backyard New Years Eve show in front of 20 close friends.

The biggest and proudest effort Jake has put together so far is the track ‘Investigators.’ Released mid December 2019, 20,000+ Spotify plays alone from its release to mid January 2020. The track mixed by Dan Konopka from OK Go is the title in which the new band name was born.

With supports from The Great Emu War Casualties, Newtown Story and Mouk, the Matinee show will showcase Jake’s songwriting abilities and versatility. Russell Bannister’s funk guitar and the hard hitting drums of Alvin Garin will have you returning to the next show. 2020 has only just begun, and there is plenty more to come from ‘Jake George and the Investigators'