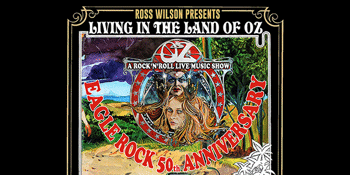 This very special event takes its name from Ross Wilson's groundbreaking 1976 first solo single, the first white rock record to address Indigenous issues. It is also Wilson's first show in a year that marks the 50th anniversary of the record-smashing first Daddy Cool album and his signature tune Eagle Rock.

Living in the Land of Oz is a significant song in Wilson's repertoire. Written and first recorded in 1976 it was his first solo single, it was not only first white rock record to address Indigenous issues, but also the theme song to the 1976 feature film Oz (a.k.a. Oz – A Rock 'n' Roll Road Movie)  by Wilson's old mate Chris Löfvén.

For his first gig of the year - the year that marks the 50th anniversary of Eagle Rock and the record-breaking first Daddy Cool album - Ross Wilson and his band the Peaceniks have chosen to highlight the sentiments of Living in the Land of Oz with this special show. The song will of course be part of Ross' set, alongside classic material from Daddy Cool, Mondo Rock and his solo work.