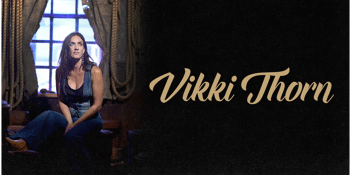 With Special Guests
Broome Convention Centre (Broome, WA)
Thursday, 24 September 2020 7:00 pm
3 days away
18 Plus
Music
Send this event to
After 25 years of singing and touring as one third of 'The Waifs', Vikki Thorn found her own voice deep in the canyons of Utah. Known for her powerful vocals and blues harp playing, she is a dynamic & passionate performer who has sung with Bob Dylan, Levon Helm, Paul Kelly, John Butler and Missy Higgins.

Now with her feet on stone and hands in the dirt, her new collection of songs portray the humor and heartbreak of life just south of Hell’s Backbone. It’s from this harsh and beautiful landscape that she draws her inspiration. It’s a long way from the fishing camps of Western Australia, where she was raised – which she sings about as well.

Themes of movement, motherhood & motocross weave through country blues, slightly side stepping away from the folk format of 'The Waifs', to indulge in her passion for old R&B.

Her voice can swing and roll or radiate the intimate warmth of the morning's first cuppa, inviting you to sit at the kitchen table while she sings about life in the wild places.