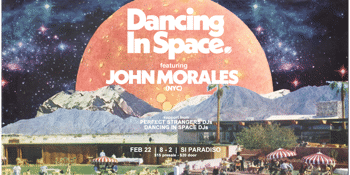 DJ John Morales was born in the Bronx, New York and has been involved in the creation of hit records for the better part of 30 years, playing at spots like Stardust Ballroom, Pippins, Bentleys, Limelight and the infamous Studio 54. Like many DJs of the 70s, John ventured into the studio more through need than necessity, making medleys and remixes because the records in those days were too short and being a DJ, he needed to get more out of the records he was spinning. His now infamous ‘Deadly Medleys’ and ‘Sunshine Acetate Medleys’ brought him to attention of New York disco producers Greg Carmichael and Patrick Adams who were impressed by the hunger and desire of the self-taught engineer. A meeting at New York’s influential WBLS radio station, where Cuban-born Sergio Munzibai worked as musical director alongside Frankie Crocker (and later at Motown Records), would signal the next chapter in Morales’ career resulting in the most prolific remix partnership in the 1980s and 90s. M&M productions have over 650 mixes to their name, with ground-breaking records for the likes of Class Action, Jocelyn Brown, Shakatak, Miami Sound Machine, The Temptations, Tina Turner, The Rolling Stones, Spandau Ballet, Aretha Franklin, Shalamar, Hall & Oates, Candi Station, Billy Ocean, The Commodores and even Peter Schilling and Rod Stewart. In fact, just about every major artist of the day was in some way retouched by the hands of Morales & Munzibai. John has recently completed a CD compilation for BBE, with new expanded editions of James Brown and the Four Tops, Marvin Ashford & Simpson and many more.