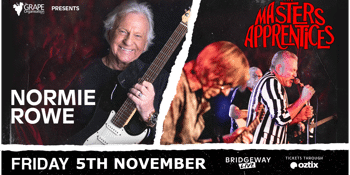 Normie Rowe was our first King Of Pop. He was far and away, Australia’s most successful pop idol during the explosion of pop music and fashion in the mid-60s. He produced a string of hits that are an important contribution to the soundtrack of the Baby Boomer generation. “Que Sera Sera”, “Shakin’ All Over”, “It Ain’t Necessarily So”, “It’s Not Easy” and “Ooh La La”, among them, produced fan and media hysteria unseen before or since for an Australian artist.

At the peak of his popularity, Normie was called up for Army service. Following which he turned his hand to television acting with a long run in Sons and Daughters. At the same time, he was studying acting and honing his vocal skills which led to his critically acclaimed role as Jean Valjean in Les Miserables. His repertoire is drawn from the breadth of this extraordinary performing career. Normie Rowe AO is an Australian treasure and the consummate entertainer.

The Masters Apprentices are a legendary Oz rock band spanning over 5 decades.
The Masters Apprentices feature 4 original 1960s members including Mick Bower (guitarist and principal composer), Brian Vaughton (drums), Gavin Webb (bass) and Rick Harrison (guitarist). Vocalist Craig Holden upfront and Bill Harrod (Bass) round out the lineup.
In the 60's the Masters became a rock’n’roll/ rhythm and blues institution alongside the Aztecs, The Loved Ones, The Twilights and Easybeats taking Australia by storm. Now over 50 years later they reunite to rock out yet again with a brand new repertoire in their original 60's garage band format. It’s the only band from that era still performing major shows.
Over the last 5 decades the legend behind the Masters' songs has grown worldwide. If you see the Masters Apprentices live you will hear the Mick Bower penned early hits such as ‘Living In A Child's Dream’, ‘Wars Or Hands Of Time’ and ‘Undecided’ alongside evergreen hits from later years such as 'Elevator Driver', 'Turn Up Your Radio', 'Because I Love You' and much more.

**Tickets have been limited to allow for extra seating in venue**