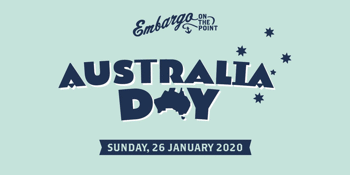 Embargo On The Point (East Perth, WA)
Sunday, 26 January 2020 2:00 PM
7 days away
18 Plus
Community
Send this event to
Spend Australia Day at Embargo Bar with Perth's best views of the Swan River - and of course the Australia Day Fireworks!

With 3 stages, 6 bars, four air-conditioned areas and a huge outdoor beer garden, there's something for everyone!

PLUS the amazing new addition of Embargo's licensed jetty boardwalk! Spend the day sipping away on a cold beer or cocktail with the absolute best views of the river and fireworks 🧨

Kicking off from 2pm and running through until Midnight with Perth's best DJs and live acts, plus a huge silent disco!

🍹Drinks🍺
All your Embargo favourites available from all 6 bars, including Gage Roads Brewing Co, Little Creatures Brewing, Balter Brewing Company, Swan Draught plus all your craft beer favourites -- along with Bunkers Wines, the Embargo Gin Cocktail Station, plus a full selection of other Summer Cocktail Jugs!