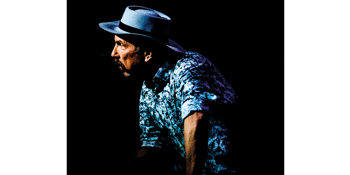 The Wheatsheaf Hotel (Thebarton, SA)
Sunday, 23 May 2021 3:00 PM
17 days away
18+ (unless accompanied by Guardian)
Australian Artists
Send this event to
Rob Snarski returns to The Wheaty to launch his new double album Song Gifts.

Snarski the velvet-voiced troubadour and singer with our national treasures The Blackeyed Susans, originally formed as a holiday band for one of this country’s greatest exports The Triffids. The Susans boast multiple ARIA nominations, tours with Johnny Cash, Leonard Cohen, Paul Kelly and Wilco.

Snarski launched his debut solo album, “Wounded Bird” in 2014 winning the listeners Album Of The Year on 3RRRs Off The Record. In 2015 he followed up with  “Low Fidelity”~ a selection of covers recorded in the hills of Tecoma on his iPhone and in 2019 returned to the studio with Shane O’Mara or the exquisite and fuller musical soundscape of “Sparrow & Swan”.

Throughout the Victorian lockdowns, Snarski was kept busy honing his craft ~ writing and recording over 100 songs as gifts for fans and friends ~ “Song Gifts” has just been released as a best of two disc, double album.

Expect songs from the past and present with Rob dipping into the back catalogue but with a focus on these new and curious Song Gifts.