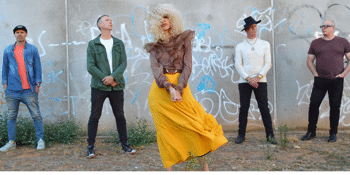 The Wheatsheaf Hotel (Thebarton, SA)
Saturday, 26 September 2020 8:00 PM
Today
18+ (unless accompanied by Guardian)
Australian Artists
Blues
Send this event to
Newly signed to US/Japanese label Color-Red Kings and Associates will be launching their first single under the Color-Red umbrella along with a bunch of new songs at the Wheaty on Saturday September 26th. Though Covid restrictions delayed the launch the band has been busy finalising the international release with the label through their US management meaning it is now officially their first Color-Red project.

The partnering has put a spring in the step of the SA based band after their 40 date 2020 US tour was cancelled due to the global situation. ‘we were obviously really bummed at the tour being cancelled’, says lead vocalist and song writer Angie, ‘we had over 40 dates locked in which built incredibly on what we’d achieved from our 2019 US tour, but, the world is a very different place now….our plan is to be as proactive as we can, so now having the network reach via the label it’s a real game changer and gives us something really positive to work with’.

In the same way the band recorded their 2018 award winning album Tales of a Rich Girl, the new tunes were recorded with 7 x Grammy winner Jim Scott in LA slotting in tracking time during the 2019 tour. The big difference being the way in which the tracks were compiled both conceptually and in the studio. ‘we set out to write and record songs in the traditional vinyl form, so that’s 8-10 tracks with some form of flow and connection’, says Angie. ‘we also had the opportunity to have all of us in the 1 room tracking simultaneous including both our US based organist Louie Higuera, and Aussie keys player Paul White….this, and the environment created by Jim and his amazing studio was incredibly inspiring, so we genuinely believe these songs are a very true representation of where we’re at creatively.’

The band will be releasing a series of singles over the coming months through Color-Red with hard copies being available on vinyl, CD or download at the Wheaty on the night, or via the Color-Red and band’s web sites.