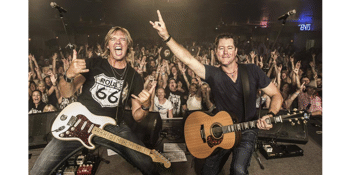 Aussie Country-Rock titans, McAlister Kemp announce their long-awaited return to the live arena, kicking off with a show at the iconic Longyard Hotel on Saturday 25th January as part of the Toyota Country Music Festival inTamworth. The duo consisting of Drew McAlister and Troy Kemp are one of the most successful Australian country music acts of the last decade. From the immediate breakout success of their debut album ‘All Kinds of Tough’ in 2010 through to their parting in 2015, the pair earned their stripes as one of the highest selling and most consistent touring acts in Australia.

The five year break has been rewarding for Drew & Troy individually with solo albums, hit singles, awards and touring and with a legacy as enduring as the MK catalogue, it was only a matter of time before the pair would unleash once again.