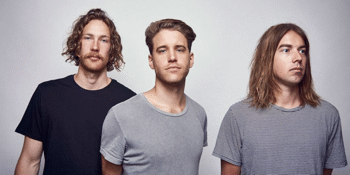 Miranda Hotel (Miranda, NSW)
Sat 25 - Sun 26 January 2020 9:00 pm
Today
18 Plus
Music
Send this event to
January Long Weekend ft Crooked Colours [DJ set] + Nyxen [DJ Set] + more at Carmens. We're extremely excited to announce one of the hottest Australian electronic groups Crooked Colours joins us for a special January long weekend party joined by the extremely talented Nyxen! /// Crooked Colours /// Crooked Colours, consisting of members Philip Slabber, Leon De Baughn and Liam Merrett-Park, burst onto the scene in 2013 with breakout singles Come Down, Capricious and Another Way, earning three consecutive #1’s on Hype Machine and gaining a solid fanbase around the world. The result of a patient approach from an act determined to create a timeless debut, their album Vera released in 2017 demonstrated diverse and layered productions from a breed proving themselves as one of Australia’s hottest rising acts in electronic music today. Hit singles Flow, I Hope You Get It and Come Back To You were been picked up by radio stations and press around the world such as Radio 1, Eins Live, triple j, Majestic Casual to name a few. To date, the band has had over 50 million streams on their debut accompanied by award winning music videos for all previously released singles. ------------------------------------------------------------------------------------------- /// Nyxen /// Tokyo-born and Sydney-residing Nyxen has had a whirlwind career thus far. With an ever-expanding catalogue of dynamite electronic tunes and a loyal following in tow, Nyxen has amassed over 16 million streams, sold out her debut headline national tour, and performed at some of the biggest festivals in the country. Following on from early success as a triple j Unearthed Feature Artist, and winner of the Unearthed slot to perform at 2017’s Field Day, Nyxen has made waves on dancefloors at Splendour In The Grass, Lost Paradise, Output Listen Out, and Snowtunes with her understated, impactful vocals and atmospheric instrumentals. With the addition of emotive and dark single ‘In The City’ to triple j rotation, and an abundance of consistent support from the Unearthed team and both global and domestic media, Nyxen added a performance in support of Golden Features on his highly anticipated 2018 national tour to her ever-growing resume. This will sell out, tickets are on sale now through Oztix. Early bird $20 +bf 1st Release $25 +bf Final Release $30 +bf