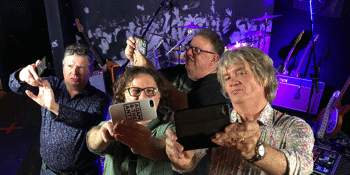 Tigers at the Edge of Time
Marrickville Bowling Club (Marrickville, NSW)
Friday, 11 June 2021 7:00 PM
23 days away
18 Plus
Rock
POP
Australian Artists
Music
Send this event to
The Smart Folk formed in 2013 when two members of Sydney mod-revival band The Mayday Dreamers embarked on a different musical path as an acoustic duo.
It was only ever meant to be a one-off show playing acoustic mod and folk classics, but over the last five years The Smart Folk has evolved into an original four piece electric combo, incorporating mod, psych, and power pop into their own unique sixties-inspired sound.
Appearing regularly at various venues, alongside some of Sydney's best bands, The Smart Folk released their debut EP "A Sunny Afternoon at the Zoo" to the wider world in April 2017.
Their new double A-side single "Shadow of the Panther/Not Quite A Match" is the first taste from current recording sessions for a debut LP in 2019.
The Smart Folk released their debut LP 'Yesterday Repeating' to the world in November 2019, and things were looking up for 2020 with talk of touring...until the world came crashing down.
Gigs were few and far between, and socially distant streaming became normality for a struggling music industry. However, as 2021 has kicked off, the boys will be back in the studio to cut a new EP, and we'll see how the year pans out.

The Marrickville Bowling and Recreation Club is a COVID-Safe venue.
Tickets will be available on the door on the evening. u18's must be accompanied by a responsible adult.