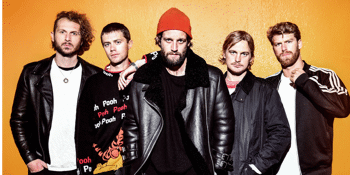 The Rubens are back in a big way with the release of new single & infectious summer jam, ‘Live In Life’.

To celebrate the release, the band will headline a string of regional summer shows as part of their Chucka Buckas initiative - a brand that The Rubens have established to support new and emerging bands. Stay tuned for announcements on emerging support bands!

The new single , blends their signature hooky choruses with a shadowy undertone, ‘Live In Life’ was co-produced by the band and Konstantin Kersting (Tones & I, Mallrat) & recorded in the same WW2 bunker that birthed their third and most recent album, 2018’s LO LA RU.

Premiered on triple j Breakfast, the world of ‘Live In Life’ follows a guy over the course of one night as he comes to terms with the gravity of a relationship breakdown. As the sun sets, he’s feeling positive about the next chapter – a feeling that’s quickly trumped by the weight of regret as night falls, by which point the damage is done and he realises it’s time to move on.

This year has also seen The Rubens travel to North America, UK & Europe for headline tours, perform and release their MTV Unplugged Live In Melbourne album, launch their Chucka Buckas initiative + bunker down to write and focus on new music.