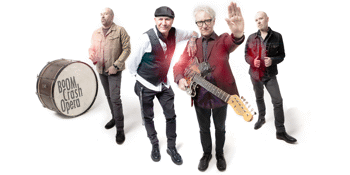 with special guests
Caringbah Hotel (Caringbah, NSW)
Friday, 5 June 2020 7:00 pm
59 days away
18 Plus
Rock
Australian Artists
Music
Send this event to
Dale Ryders return to Boom Crash Opera worked out so well, the boys are very pleased to announce another tour celebrating the bands vast catalogue of songs in both electric and acoustic mode at a selection of hand-picked venues in NSW, QLD, SA and VIC.   In June 2020, Dale, Peter ‘Maz’ Maslen, Peter Farnan and John Favaro plan to delve deep into the annals of the BCO back catalogue... playfully referred to by the band as ‘digging into the crate’ to work up obscurities and deep album cuts for the fans. Don’t just expect the likes of ‘Onion Skin’, ‘Dancing In the Storm’, ‘Get Out of the House’ and ‘Best Thing’. Boom Crash Opera have 5 original studio albums to chose from…. ‘Boom Crash Opera’ (1987), ‘These Here Are Crazy Times’ (1989), ‘Fabulous Beast’ (1993), ‘Born’ (1995) & ‘Gizmo Mantra’ (1997), as well as their acclaimed acoustic album ‘Dancing In the Storm’ (2009). Fans can expect to be treated to a smorgasbord of Boom Crash Opera gems and rarities…