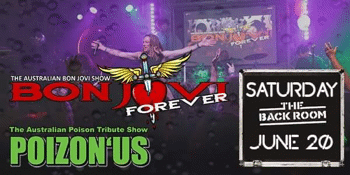 The Back Room (Annerley, QLD)
Saturday, 31 October 2020 7:00 pm
76 days away
18 Plus
Music
Rock
Send this event to
Direct from Melbourne, Bon Jovi Forever - The Australian Bon Jovi Show hits the Backroom Stage Live, delivering you the fans an epic night of pure Jovi Glory. The Number One Bon Jovi Show in the World is coming to Brisbane For ONe wILd nIGht Only.

Poison'Us are Australia's only Poison Tribute show, bringing you all the classic hair metal favorites you know or will remember.
PoisonUs fronted by Matty Bee or Aussie Bret as he become known, is the charismatic Bret Michaels (also known from the hit reality TV Shows Rock Of Love, Celebrity Apprentice & Rock My RV) is perfectly represented in this one of a kind show, not only by looks but vocally - you have to see & hear it to believe it!
This great show includes many of the bands biggest hits - "Every Rose Has Its Thorn" - "Nothin But A Goodtime" - "Unskinny Bop" - "Talk Dirty To Me" - "Your Mamma Dont Dance" to name just a few. Poison’Us have appeared on Foxtel’s The Tribute Show to verify their absolute authenticity, wowing audiences Australia wide with their high energy, party atmosphere show has made them one of the most sought after Tribute Shows in the land!
So come along and see a true classic LA Hair Metal band replicated the way they should be you are certain to have "Nothin But A Goodtime!!!!"