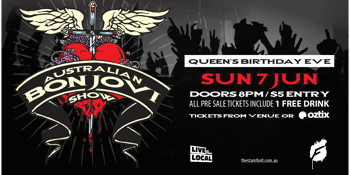 Performing all of Bon Jovi’s powerhouse hits and obscure classics, this show leaves even the most diehard fans wanting more! With Anthems such as “Living on a Prayer”, “Always”, “Bed of Roses”, You Give Love a Bad Name” and “It’s My Life” to name a few, the show provides over 2 hours of high energy and truly passionate delivery. You won’t believe your eyes and ears!

The Show has featured on National TV shows such as Channel 9 AFL Footy Show & Foxtel’s The Tribute Show.

It’s always the hottest party in town with The Australian Bon Jovi Show. This is the ultimate night out for all ages and live rock enthusiasts.