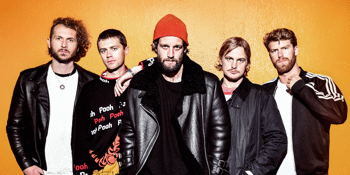 with Special Guests
Coolangatta Hotel (Coolangatta, Gold Coast, QLD)
Friday, 31 January 2020 8:00 pm
11 days away
18 Plus
Music
Send this event to
The Rubens are back in a big way with the release of new single & infectious summer jam, ‘Live In Life’.

To celebrate the release, the band will headline a string of regional summer shows as part of their Chucka Buckas initiative - a brand that The Rubens have established to support new and emerging bands. Stay tuned for announcements on emerging support bands!

This year has also seen The Rubens travel to North America, UK & Europe for headline tours, perform and release their MTV Unplugged Live In Melbourne album, launch their Chucka Buckas initiative + bunker down to write and focus on new music.