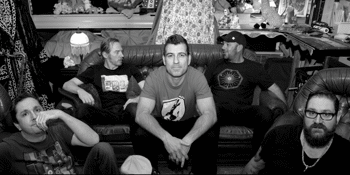 After the demise of Seattle groups Mother Love Bone and Shadow in 1990, Stone Gossard, Jeff Ament, Mike McCready (and Matt Cameron) sent out a five song demo to find a singer and a drummer for their new project.  Red Hot Chili Peppers founding member Jack Irons passed up joining the group on drums but sent the demo-tape on to his vocalist friend Eddie Vedder in San Diego.  Seattle local Dave Krusen became the full-time drummer replacing part-timers Matt Chamberlain, who was committed with Edie Brickell & New Bohemians and Matt Cameron who was in Sound Garden at the time.

The band played its first official show in 1990 at the Off Ramp Café in Seattle under the name Mookie Baylock.  They supported Alice In Chains later that year under the same name before recording their debut album Ten and releasing it as - Pearl Jam.

The Brown Study Band celebrates Pearl Jam's milestone and applauds them with an evening of carefully selected hits and favourites presented with astonishing authenticity.