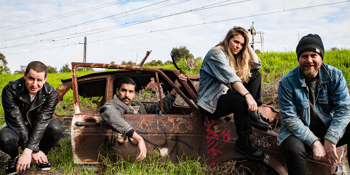 To be announced
Vinnies Dive (Southport, QLD)
Saturday, 16 May 2020 8:00 pm
37 days away
18 Plus
Punk
Indie
Send this event to
Every so often a musical outfit will release a song that isn’t necessarily a component of a greater body of work. A song can sometimes be just that. A song. Not known for being profoundly enigmatic, Melbourne touring juggernaut, PRESS CLUB, release a bolt from the blue.

It was shortly after the release of their ferverously received sophomore long-play, WASTED ENERGY, that the band was approached by German publication, Visions magazine. The magazine was seeking never-before heard material to populate their annual CD compilation of rarities alongside IDLES, Metz, Ty Segall, Marilyn Manson, J. Mascis et. al . PRESS CLUB tend to write songs en mass, and to date, during the writings for their first two albums they have written over 110. Due to the band's creative workflow, for each song PRESS CLUB has ever released there is at least five that have never been heard by the general public, nor the band’s mothers.

When prompted by Visions magazine, PRESS CLUB instantly presented the outlet with ‘INSECURITIES’, three minutes and two seconds of concise and visceral power-pop. PRESS CLUB are more melodious than ever. With shades of 1980’s North American punk rock and craftily interwoven overdrive, ’INSECURITIES’ unfurls into an anthemic chorus, with a decidedly folk sensibility. Lyrically singer, Natalie Foster, reveals self doubt, insecurities, and it is a touchstone for the band’s progress since releasing their debut record Late Teens in 2018.

‘INSECURITIES’ is blessed with absolutely slamming production and interlacing melody across the board. The tracks release hits your mailbox shoulder to shoulder with the unsurprising announcement of more time on the road for Australia's darlings of the highway, PRESS CLUB, playing Melbourne, Gold Coast, Brisbane, Sydney and Wollongong.