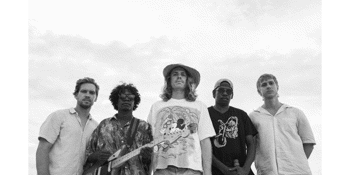 John Curtin Hotel (Carlton, VIC)
Friday, 12 November 2021 6:00 pm
47 days away
18 Plus
Indie
Rock
World
Funk
Music
Send this event to
Yolngu surf rock band King Stingray make their way south for Dark Mofo with a short stop in Melbourne for two exclusive shows at the John Curtin Hotel. Named one of the "seven bold new Australian voices to listen out for in 2021", the children of the iconic band Yothu Yindi, have lost no time so far this year in making good on that prediction - selling out rooms across the East Coast for their first headline tour and attracting invitations to play coveted festival slots.

King Stingray is a story of lifelong friendship, of two cultures coming together. From toddlers in the Yothu Yindi tour entourage in the 90s, to fully fledged Yothu Yindi members today, Yirringa (current lead singer of Yothu Yindi) and Roy (current guitarist of Yothu Yindi) have been playing and making music together for as long as they can remember. King Stingray seamlessly blends Yirringa's timeless Yolngu manikay vocals, ancient indigenous melodies and surf, indie and funk influences to create a genre of their own, Yolngu surf-rock.

Following in the grand footsteps of their parents, King Stingray are the new generation, celebrating indigenous culture and multiculturalism through music.