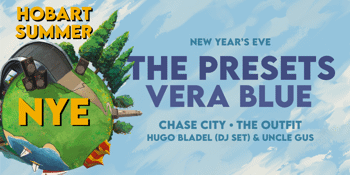 Hobart Summer NYE with The Presets and Vera Blue

A big New Year’s Eve celebration headlined by Australian electronic icons The Presets, supported by Vera Blue and locals Chase City, The Outfit and Hugo Bladel and Uncle Gus.  Vandemonian says to expect many more announcements over the coming weeks.

The Presets are a Sydney-based duo consisting of Julian Hamilton and Kim Moyes.  Since bursting onto the scene in 2005, the Sydney-based duo have set new standards for dance music in Australia.  They’ve released four critically acclaimed albums, won multiple ARIA Awards and are recognised worldwide for their dynamic live performances.  Joining The Presets on New Year’s Eve is Vera Blue. The Australian singer-songwriter is best known for her catchy folk-inspired pop tunes like ‘Regular Touch’ and ‘Rushing Back’.  Local favourites Chase City, The Outfit, Hugo Bladel and Uncle Gus will complete the lineup to welcome in 2022.

"We’re psyched to be ringing in the new year with all our Tassie mates down on the Hobart foreshore. Join us this NYE and let’s kick 2021 where it hurts” - Julian Hamilton, The Presets.

-----
This event will comply with all Covid-19 restrictions in Tasmania. Due to the changing nature of restrictions at the moment further details will be released at a later date. Be prepared to abide any precautions necessary