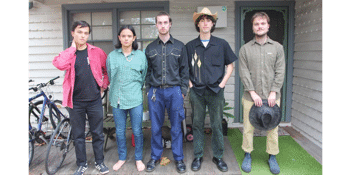 On his death bed Franco whispered into the ears of five crusaders…”you have no mercy son”. Out of this supernova, new life was born. Big Farmer. Racing between angular guitar lines and HUGE synth tracks, Big Farmer evoke a jangly sound reminiscent of New Zealand indie pioneers The Clean and The Verlaines, culminating in a high energy rock show that is sure to till your soil. Big Farmer delve into deep and thoughtful lyrical themes such as the death of Franco Bernet, the problem of contemporary agricultural appropriation, and Monday night meal deals at your local pub, delivering music that will not only make you feel, but will make you think. Joining BF will be lo-fi rockers Babyccino, who will be rolling in hot off the release of their debut EP “Stomach Bug”, along with Teddy Griffith.