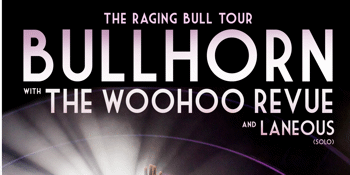 “So gimme a stage
Where this bull here can rage.
And though I can fight,
I'd much rather recite
That's entertainment!"


BULLHORN are hitting the road Jan - March, 2020, for their "Raging Bull Tour"! They'll be bringing their high octane show across 3 Australian States, including VIC, QLD & NSW, and crossing The Tasman Sea to Aotearoa. Don't miss them at Evelyn Hotel in Melbourne Fri Jan 24th with The Woohoo Revue and Laneous (solo)!

BULLHORN have been working hard on the Australian music scene, performing at festivals all over the country including Splendour In The Grass, Queenscliff Music Festival, Woodford Folk Festival, Port Fairy Festival, Vivid Sydney, Mullum Festival, Bello Festival and many others!  After a spate of so many fantastic shows BULLHORN are gig fit and never sounding better! Roman MC, the front man, is intoxicating with his rhythmic word play and massive charismatic stage presence. When his skills are combined with the hard hitting sounds of 7 horns players and 1 bossing drummer the results are awe-inspiring. Their shows are a unique and incredible experience, like no other, and a must to see.