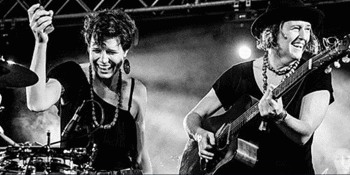 After quickly selling out an initial show at Mo's Desert Clubhouse, the duo is pleased to announce an encore performance at Miami Marketta on Saturday 22 August to announce the arrival of their new album release 'Gather Up the People'.

Prolific and accomplished musicians, Hussy Hicks have honed their sonic dexterity over the past 13 years with six studio albums, multiple industry awards and more than 1,000 live shows under their belts.  From Australia’s biggest Blues, Roots and Folk festivals to 15 international tours, including sell-out tours of Europe, the Hussy's most recently won Gold Coast Artist of the Year and Album of the Year amongst many more accolades.

Never ones to shy away from activism, social commentary or using their voices for the greater good, Hussy Hicks follow up their 2017 Album of the Year winning release with their new 6th studio album, Gather Up The People out on 24 July, which looks at many of the issues at the forefront of the global consciousness this year, calling for a future without sexism, racism, homophobia and xenophobia, but most importantly, without fear