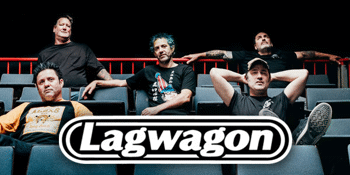 THE LAG IS OVER, IT’S TIME TO GET BACK ON THE WAGON!

To get in early on tickets before they sell out - fans can sign up HERE to access the exclusive fan ticket pre-sale which starts on Tuesday Sept 10 from 10AM [AEST]. General public tickets will go on sale Friday Sept 13th at 10AM [AEST]. For more info visit HERE.

The new single “Surviving California, was inspired by the city where front-man Joey Cape now lives and serves as both a personal and political treatise on the socio-economic state of America today. The title of the influential punk five-piece’s ninth album, RAILER is due out October 4, 2019 on Fat Wreck Chords - Pre-order HERE. It captures the spirit of the band’s early days – youthful but jaded, frantic but exhausted, visceral yet cerebral. As Cape explains, ‘railer’ is “a funny word from childhood that means ‘silly bad’, like lame” and it captures the sense of throwback that flows throughout its 12 songs.”

Bred from the long lineage of punk bands out of Southern California, Lagwagon became one of the most influential, pioneering the now-famous ‘Fat Wreck sound’ with their speedy drums, guitar virtuosity and undeniable melodies.  Don’t miss legendary punks Lagwagon on their Australia and New Zealand March 2020 tour.