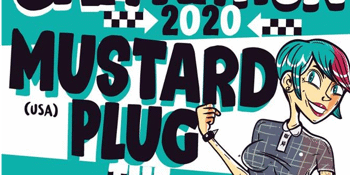 Mustard Plug (USA), The Resignators, Loin Groin, Out of Control Army (Mexico)
Wrangler Studios (West Footscray, VIC)
Monday, 9 March 2020 1:00 pm
20 days away
All Ages
All Ages / Under 18’s
Send this event to
The sixth edition of Ska Nation returned to the live music scene in 2019, after five years hiatus. with much acclaim and edition 7 returns in 2020 even bigger and better!

We here at Focus Group Music have been trying to get Mustard Plug to Australia for the past 15 years and we are excited to introduce Australia to the rawkus fun and dancing that Mustard Plug bring to every live performance, with bangers such as Mr. Smiley, The Beer Song, You and many others from their back catalogue.

Mustard Plug started out in the punk clubs, basements and dive bars of the Midwest, playing punk-influenced ska music before most people in the U.S. had ever heard of ska. They clung to a DIY work ethic that had been ingrained in them growing up in the 1980′s hardcore punk scene and applied it to everything they would ever do together as a band.

Twenty-one years, 1500 shows and 200,000 album sales later, it cannot be denied that the band has surpassed all expectations and permanently staked their claim in contemporary music.

Joining Mustard Plug at Ska Nation 2020 are Australia’s favorite ska – punk brats The Resignators, an all to rare reunion of Melbourne’s quintessential pub band Loin Groin, Mexico City’s back beat rockers Out of Control Army and more to be announced.