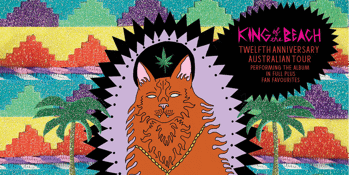 with special guests
The Brightside (Fortitude Valley, QLD)
Sunday, 30 October 2022 7:30 pm
80 days away
18 Plus
Indie
POP
Rock
Send this event to
Due to overwhelming demand Wavves have added an extra show to accommodate more fans and bring you 'King of the Beach' in full