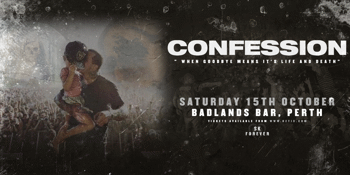 Against The Grain presents

with special guests
Badlands Bar (PERTH, WA)
Saturday, 15 October 2022 8:00 pm
68 days away
18 Plus
Hardcore
Metal / Hard Rock
Punk
Rock
Send this event to
Michael Crafter’s history on stage stretches back to 2002 with Adelaide’s infamous I Killed The Prom Queen, a band he fronted that led the charge of Australian hardcore overseas in the mid 2000s. Following IKTPQ, with stints fronting mosh icons Carpathian, Bury Your Dead and his own project with Confession, he’s seen and done it all - Australian DIY house shows to summer festivals, snowy winter treks through Europe, the chaos and energy of the US hardcore scene and everything in between, all with supreme confidence and a real big mouth.
That big mouth and willingness to speak his mind has gotten Crafter in to trouble more times than anyone can count, but has seen his life post-Confession take a more positive turn. As the owner of the successful Against The Grain chain of tattoo studios, barber shops and coffee spots in WA, Crafter has been giving back to the community with Christmas toy drives for local domestic violence and homeless shelters and is a tireless advocate for positivity and breaking the stigma around men’s mental health issues, with depression, cancer and suicide touching those near and dear to him in recent years.
It’s this back drop which finds Crafter combining his passions for the When Goodbye Means Life And Death tour. It’s an opportunity for Crafter and Confession to showcase his 20+ year career on the mic commanding the pit but more importantly, will honour his late friend and IKTPQ band mate, Sean Kennedy. The songs they created that took the pair and the band (rounded out by JJ Peters, Kevin Cameron and Jona Weinhofen) round the world and established the blueprint bands like Parkway Drive, The Amity Affliction and Northlane have since expanded on to take Aussie heavy music to the world.