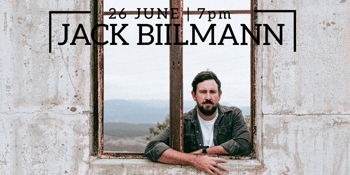 ‘Legacy’ was written by Jack and co-produced with long time collaborator Matt Barnes, and assisted by drummer Michael Barker, former member of John Butler Trio. The single touches on mortality and the desire to live a meaningful life.

“How would you like to be remembered? What did you contribute? What mark are you making for yourself and the people you care about?”

Jack Biilmann debuted in 2014 and has since built an incredible musical resume for himself. The talented singer/songwriter has shared the stage with John Farnham, The Cat Empire, Tash Sultana, Bobby Alu, Citizen Kay, Ian Moss, Mat Mchugh (The Beautiful Girls), Jay Whalley (Frenzal Rhomb), Abbe May and Kim Churchill.

His releases have secured airplay on Triple J and coverage via outlets such as The Herald Sun, The Music and The Daily Telegraph. He has also gained official partnerships with world-renowned guitar brands Gibson and Maton.

Jack’s new single ‘Legacy’ is now available for download and streaming on all major online stores.