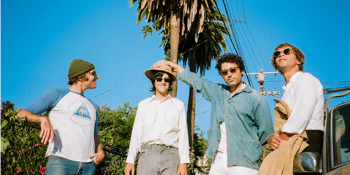 California’s shimmering psych-folk melody-makers Allah-Las have unveiled their full run of Australian tour dates for 2020, following from the October announce of their slot on Brisbane’s impressive Nine Lives Festival.

The tour, presented by Contrary and Strange Yonder, kicks off in February and sees the band make pit stops in Sydney, Melbourne, Byron Bay, Gold Coast, and an intimate show at Perth’s music institution Mojo’s. The summer run of dates marks the second time Allah-Las have touched down in Australia after their maiden voyage to the country in 2017 sold out every show on the touring circuit, forcing promoters to add more dates to meet overwhelming demand.

This time around, Allah-Las will be touring their acclaimed fourth LP which dropped in October, LAHS, released via Mexican Summer. Widely noted as the band’s most thoughtful and evolved work to date, LAHS conjures the luscious allure of a breezy Los Angeles summer with an irresistible slice of surreal psychedelic meanderings that unfolds into a sound so palpable you can virtually taste the salt water on your tongue.

Tickets to Allah-Las Australian tour are on sale now.

Allah-Las Up In The Air https://www.youtube.com/watch?v=Meuo7BpUOL0