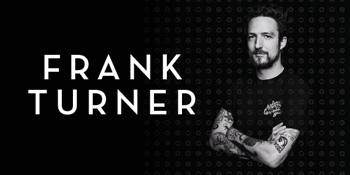 The tour dates will see Frank Turner bring his unwavering, frantic and formidable live set to Auckland, Wellington, Sydney, Melbourne, Perth and Adelaide stages alongside a slot at Bluesfest. Joining Frank on the Australian dates will be the passionate punk rocker, Bec Stevens and on the NZ dates will be the dynamic and Indie zest-drenched BEING. (hot tip – get there early and don’t miss their sets!).

The early bird ticket pre-sale starts on Tuesday 19th November at 10.00am AEST. Sign up to the mailing list (https://sbmpresents.com/tour/frankturner/ ) to get early access. General public tickets go on sale Wednesday 20th November at 10.00am AEST. For more info visit https://sbmpresents.com/tour/frankturner/

Touring in support of his latest album No Man’s Land, which features an all-female cast of musicians, focusing on inspirational women from all walks of life whose stories have been largely overlooked. Honing in on his love of folk with acoustic guitar the guiding force, he tells these stories (many of them dark and tragic) with empathy, tenderness, and a desire to illuminate curiosity about his subjects, highlighting both their struggles and valiant successes, making No Man's Land a welcome addition to Turner's critically acclaimed catalogue.

“It’s bringing together my two main interests in life, which have always been separate from each other - history and songwriting,” explains Turner, who can be found seeking out long-forgotten historical sites on self-guided psycho-geographical strolls when he’s not packing out arenas or headlining festivals. Delivering his yearningly honest and heartfelt punk-tinged catalogue, don’t miss UK’s Frank Turner on his Australian and New Zealand 2020 tour!